Adobe today has published an update for Flash Player that brings the current version of the product to 11.1.102.63 on the desktop, and version 11.1.111.7 on Android devices. Adobe classifies the update as a priority 2 update that fixes several critical security vulnerabilities that have been discovered earlier in the product. Priority 2 is the second highest priority rating, and critical the highest severity rating.

[A priority 2] update resolves vulnerabilities in a product that has historically been at elevated risk. There are currently no known exploits. Based on previous experience, we do not anticipate exploits are imminent. As a best practice, Adobe recommends administrators install the update soon (for instance, within 30 days).

The vulnerabilities can be used by attackers to cause a crash on the target system running vulnerable versions of Flash, to take control of the affected system. Adobe recommends that users update their Flash Player version to the latest version as soon as possible to protect their system vulnerability exploits.

Flash users who do not know which version of the product they have installed, should visit Adobe’s About Flash page to find out. Flash Player needs updating if the version displayed is lower than 11.1.102.63 for a desktop system, and lower than 11.1.111.7 for Android systems. 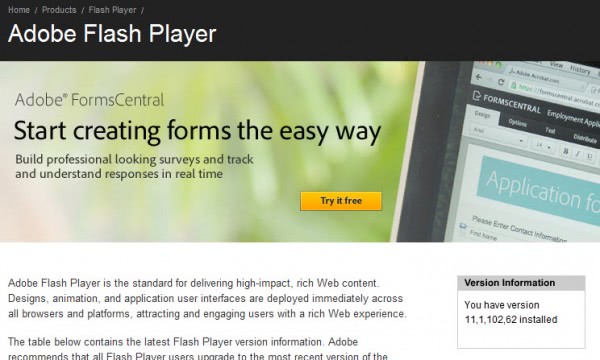 Desktop users can visit the Get Flash Player website to download the latest version of the product from the Adobe website. Keep in mind that you need to close all open web browsers before you can complete the update of Flash Player on the system. The Google Chrome browser is updated automatically via Google Update, an update for that browser alone is not necessary.