Never let it be said that Linux users and developers do not have a sense of humor. Even the most hardcore of users, developers, designers, and administrators need something to serve as a distraction. Oh sure there’s always an endless array of web sites to take our attention, but that requires a GUI! What if you’re spending a lot of time on your GUI-less Apache server, file server, or any other type of Linux server? What then? NCurses can only do so much with text right? Not if you’re creative enough to install an ascii aquarium on your machine.

With this little ascii animation you can enjoy an animated pseudo-screensaver even on your GUI-less server. It won’t boost your productivity, it won’t make you a better programmer or your web site run faster. But it could bring you a bit of “security through obfuscation” from those who want to try to log onto your physical GUI-less workstation. Let’s see how to install and use this little under water wonder.

This little gem can be install on nearly any Linux distribution. As long as you have Perl installed, you should be able to get this up and running in no time. Here are the steps you need to follow. I will assume you might want to test this on a normal GUI-fied version of Linux before you try it on your GUI-less server. So, let’s install.

The first portion of the installation will take care of any remaining dependencies that aren’t included in the standard Perl installation. For this installation, follow these steps:

Now to install the actually asciiquarium application. Follow these steps. 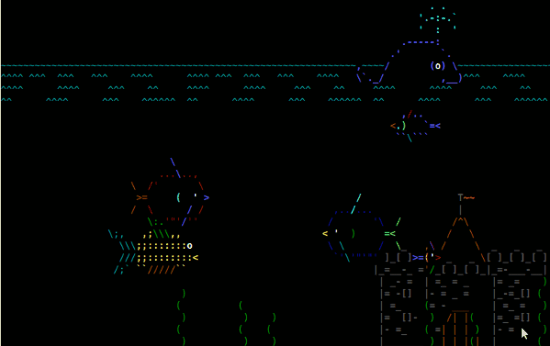 It is time to test out the waters of asciiquarium. To do so open up your terminal window (or if using a GUI-less machine – log in) and issue the command /usr/local/bin/asciiquarium. When it runs it will look something similar to Figure 1 (but in animated form).

Now, you may be asking yourself how could this serve as a form of security? Simple. Even with a standard desktop distribution you can log into a virtual terminal (Ctrl-Alt-F2 – for instance), log in, and run the application. Your full screen will be filled with the asciiquarium and unless a user knows to either hit Ctrl-c or move back to your original virtual terminal, they won’t have the slightest idea what to do.

Continua a leggere – Original Link: Have some Linux ascii fun with asciiquarium [3]