A week ago I asked readers to tell me how they’re using Google Wave [1] in their daily lives, and despite a bit of “ha! no one’s using Wave!” snarking on the Twitter, I got lots of interesting responses. Unsurprisingly, most Wavers use it as a real-time wiki, but some take advantage of features unique to Wave, like inline and private replies, public tags, and gadgets. I featured the most unique use cases I got in a brand new chapter just added to The Complete Guide to Google Wave [2]. The following is the text of the just-published Chapter 10 [3], which describes ways in which a few people who don’t work for Google are using Wave to get things done–with screenshots.

So far you’ve learned the finer workings of Wave in great detail, but there’s a big difference between understanding how to swing a hammer and building a house. In this chapter, you’ll meet regular people who are already getting things done with Wave in their daily work and life. You’ll learn the Wave techniques they’ve developed through trial and error, and the specific Wave features they use to get certain jobs done. Finally, you’ll create wave templates you can use and reuse for your own purposes.

Take a look at some real-world case studies of Wave in action. 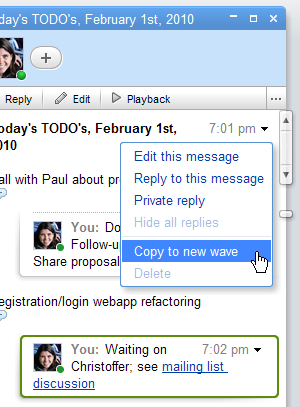 Justin Swall runs Swall’s Associated Services, a small company which provides computer repair and consulting for small businesses. Justin uses Wave as a daily to-do list that he and his co-workers update to track who has done what. He makes use of the “Copy to New Wave” feature to transfer undone items from one day to the next, as shown in Figure 10-1.

Here’s Justin’s Wave workflow: every day he uses a fresh wave that contains that day’s tasks, ordered by priority, and what time they’re due. Over the course of the day, Justin’s group updates the wave to reflect the current status of each task.

During the day either the initial wave is edited (usually by me) to add additional items to the list, and everyone else uses inline replies to update when items are completed, or if additional information needs to be conveyed back and forth. At the end of each day I copy the day’s wave to a new wave, change the date to the next day, remove the items that were completed the day before, add new items or notes to the list, or move items from secondary to primary. Wash, rinse, repeat.

By creating a new wave that carries over the outstanding tasks left on yesterday’s wave, Justin leaves behind a daily work log that he can reference later.

For various reasons, Outlook tasks never seemed to work for us. Emailing is a nightmare (I either keep thinking of more things to add to the list and end up sending out five or more messages by morning, or I’m so afraid of doing that I keep it open as a draft so I can keep adding to it then forget to send it at all).

If you’re interested in using Wave to manage projects beyond daily tasks, see the later section in this chapter, “Wave for Project Management.”

Wave as an Event Planner

Wave is a fine productivity tool, but it also can help you have fun, too. Fifteen-year old Sean Cascketta uses Wave to organize weekend get-togethers with his classmates.

If I’m formatting a Wave for organizing an event, it usually comes with a basic list of the details (like who, what, where, etc…) as well as a Yes/No/Maybe gadget, which is perfect for these events as we can both constantly check on the RSVP status of people, and they can use the status feature to give any extra details (like if they’re bringing along some party favors, electronics or such).

Sean used Wave to create an invitation to a viewing of The Goonies, as shown in Figure 10-2. 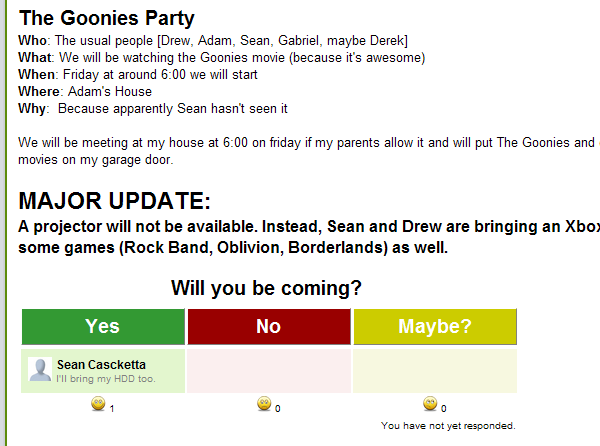 Brunch-lover Jed McClure uses Wave to organize his weekly “Brooklyn Brunch Club,” a group of friends who brunch somewhere different in Brooklyn each week, and RSVP whether or not they can make it.

We have a pretty dedicated group of brunchers here in Brooklyn, and many brunch options. But the onerous task of coordinating usually ended up resulting in people getting left off the email list. With Google Wave, the idea was to maintain a permanent Brunch wave, where people in the group could check in with and see where the next brunching would happen, and then reply if they were going to try to make it. We also set up a map widget and filled in all the spots we like to hit, to help when making suggestions (and to avoid the dreaded brunch rut).

The Brooklyn Brunch Club wave consists of maps, inline discussions debating which brunch place to hit up next, and a Yes/No/Maybe gadget to collect RSVPs, as shown in Figure 10-3. 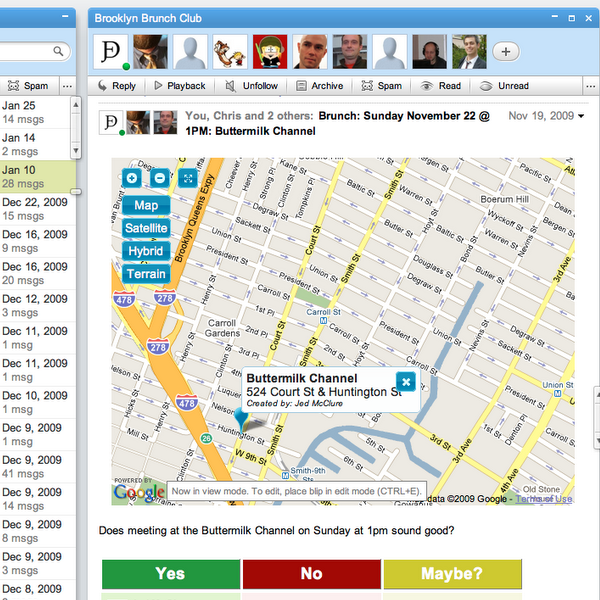 So far it has worked pretty well. The threaded nature of the dialog means that it needs to be ‘pruned’ after each brunch, so that the relevant info remains at the top of the wave. And also train people to look in the history for past brunch details.

With maps and Yes/No/Maybe built in, party, vacation, brunch, or any event planning is one of Wave’s most obvious use cases. 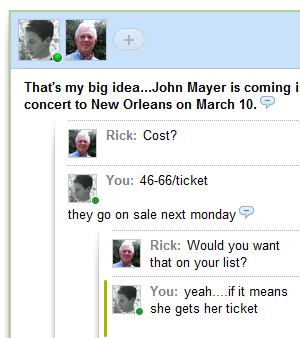 Hal Wilke has two young children, and when the holidays approach, he gives gift suggestions for his kids to their grandparents. This past year he and his wife used Wave to share and update the list.

We always email Christmas lists to Grandparents, and then get emails back sometimes to me, sometimes to my wife. Or phone calls at odd times telling us what they bought, so we have to track notes that we write about the phone calls. It was much easier this year [in Wave] because the grandparents could edit the wave as they purchased gifts, and we did not have people buying duplicate gifts, and didn’t have to track multiple lists of purchased gifts. Pretty cool that the grandparents were cool with using Wave.

The kids’ gift wave included Hal’s wife, but Hal used Wave’s private reply feature to discuss a surprise gift for her with the kidsâ€™ grandparents, as shown in Figure 10-4.

One of the most common suggested uses of Wave is taking collaborative notes[1] [4] during meetings, classes or conference sessions, and Indiana University employee Manjit Trehan does just that. Manjit’s meetings usually have about 10 people attending, and four or five are in Wave, taking notes.

Instead of everyone co-editing a single blip, Manjit separates agenda items into their own individual blips.

Manjit says the process evolved from trial and error:

What I learned after a few meetings [of taking notes in Wave] is that it is best to enter one agenda item per blip. This allows a separate thread to progress below each item. Say we are meeting about ordering some hardware, and there are three open items to be discussed. Vendor selection, Installation schedule, and deployment schedule. Each of these would end up in a separate blip.

Manjit says meeting note waves can get lengthy, but he created a sample meeting wave with separate agenda blips, shown in Figure 10-5.

You’ve already seen one way to use Wave as a daily task tracker; you can also manage a more complex group project in Wave. This very book, produced by a team of six peopleâ€”including the authors, our copyeditor, designer, tech lead, and project managerâ€”used Wave to track and manage its production process.[2] [5]

Create a project workspace in Wave using an agreed-upon tag and a saved search for waves with that tag. For example, when we started managing the book project in Wave, our group decided that every book-related wave would get the “cwg” tag (short for CompleteWaveGuide.com). Each of us also saved a tag:cwg search and referred to it to see only project-specific waves, as shown in Figure 10-6. 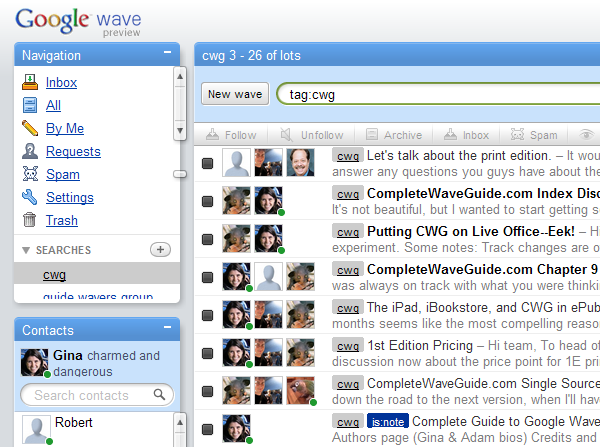 When you’re managing a project in Wave, create a new wave to discuss each topic, task, or facet of the project. For example, for this book project, we used one wave per chapter to discuss chapter-specific questions and edits. For each new edition, we’d clean out the chapter wave of old blips, and start anew, knowing that old conversation was still archived in the wave’s playback should we need to see it. We kept other separate waves to draft the style guide, discuss pricing, and see cover image revisions.

Wave as a Conference Backchannel

A smart use of wave tags works well in public waves as well as private ones. Tagged public waves make it easy for anyone to find a relevant place to discuss news or a current event, as it happens, in real-time. In fact, many tech-savvy conference organizers publicize a unique tag for its attendees to use when they post status updates to Twitter or photos to Flickr about the event. Attendees can use that same tag in Wave to create and add to event-specific discussions, too. (Those who aren’t at the event can eavesdrop on those public waves, ask questions, and add to the discussion from afar.)

For example, at the Web 2.0 Expo in New York in November of 2009, I (Gina) gave a keynote presentation called “Making Sense of Google Wave,”[3] [6] and invited attendees to wave about it using the public, agreed-upon conference tag w2e. Before I took the stage, I started a public wave and tagged it w2e so that anyone who searched for with:public tag:w2e could discuss my keynote or any other session they attended, as shown in Figure 10-7.

This technique has been used at events beyond Web 2.0 Expo; bloggers at both eComm Europe[4] [7] and the MediaWiki conference[5] [8] noted that attendees used Wave to take minutes, discuss sessions in real-time, and collaborate on notes.

The live, real-time nature of Wave makes it a natural fit for collaborating on breaking news as it happens. In fact, when Seattle police were on the hunt for a man suspected of shooting four cops, the Seattle Times used a public wave to rapidly publish updates about the manhunt[6] [10] and solicit information from reader in the process, as shown in Figure 10-8. 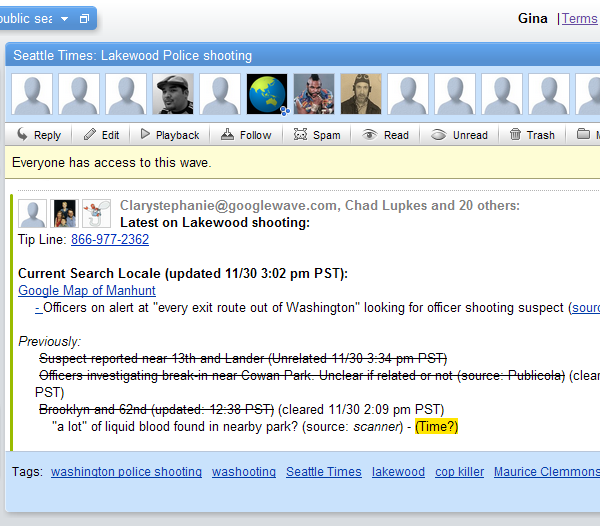 Granted, most people aren’t conducting a manhunt for a suspected killer, but we all have a reason to broadcast and get live updates on events as they happen to usâ€”like when your sister-in-law goes into labor, or Aunt Martha’s undergoing surgery, or Mom in New York is worried about how close the forest fires are to your home in San Diego and whether you’ve been evacuated.

Wave’s inline reply feature makes it a solid choice for having conversations that require back-and-forth on individual points: like an interview. Question and answer interactions can happen very easily in Wave, because the interviewer can start a wave with multiple questions. Then, the respondent can reply to each question inline, and the interviewer can optionally follow up to the response right below it without disrupting the flow of the series. The result is a readable Q&A in the correct order, as shown in Figure 10-9. 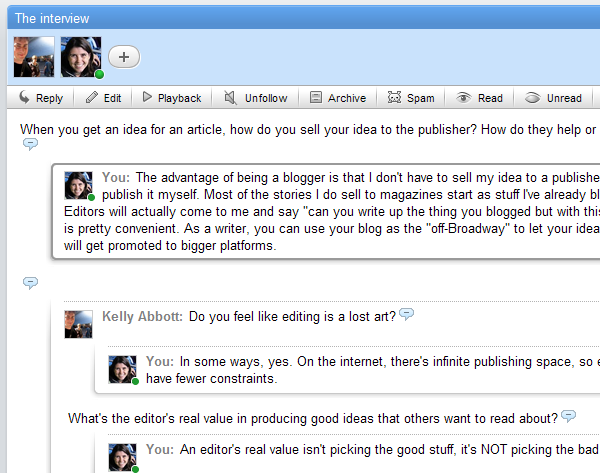 If you create waves with the same formatting and gadgets often, create a “template” wave for reuse to save yourself repetitive work. For example, if you plan a recurring event in Wave, create a new wave, and format your event title, description, and details area to your liking, and add the Yes/No/Maybe and maps gadget. Save that wave in a “Templates” folder you create.

Then, the next time you need a wave to plan the event, open the template, and select “Copy to new wave” from the timestamp drop-down. Fill in the details for the event in the new copy.

Googler Pamela Fox did just that and made her templates public and read-only, available for anyone to copy for their own purposes. Visit the read-only, public wave which lists her templates at http://goo.gl/GNUw [11], like the event planner wave template shown in Figure 10-10. 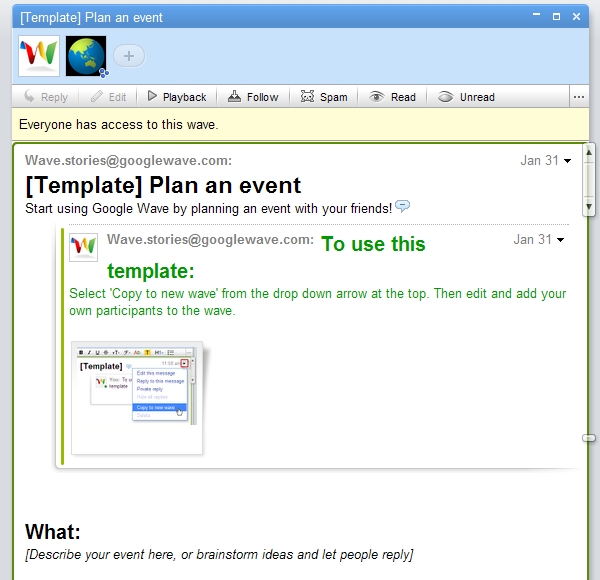